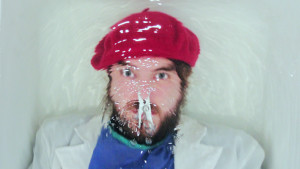 In Neal Portenza…Tracey, Ladgrove has refined the character of Portenza further, distilling him into a series of segments whose names are displayed on balloons at the back of the stage. From the wonderfully stupid ‘ball cup’ and ‘ghostboy’ to the weird and dark ‘pokégoth’, Ladgrove’s unique style of comedy had the audience in fits of laughter. There’s no narrative, just a bunch of funny, silly stuff. Fake blood, rubber geese, a megaphone – there’s no point to any of it, aside from making you laugh as much as possible. It’s simple physical foolishness at its best.

“Best tech in the world” Nathan has also returned, helpfully prodding Portenza when he’s forgotten to do a portion of the show. His well-placed sound effects add another layer of hilarity to Neal Portenza…Tracey, while his updates of how much time is left add an undercurrent of panic.

Neal Portenza…Tracey is the kind of show where the experience could vary wildly from night to night, as it’s largely dependent on the audience. With a group of people who are willing to play, it’s riotous and joyful. With a less enthusiastic audience, the performance would fall flat. Luckily, on review night, everyone was well and truly up for some madness and the energy in the room was absolutely uplifting. And there’s no reason not to get on board. In all of the audience participation, the joke is firmly on Portenza. More often than not, the audience’s main task is to rein in Portenza when he gets out of hand – or to egg him on, because things are a lot more fun when they get out of hand.

Once again, Ladgrove has created one of the most enjoyable shows of the festival. Neal Portenza…Tracey is a perfectly shambolic hour of escapism from a performer that just gets better every year.