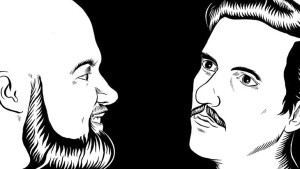 Ben Russell and Xavier Michelides stage every comedian’s nightmare in Nö Shöw – a show where it is always opening night and no-one has shown up to watch. It’s an absurd narrative comedy that twists into some weird places, but brings the laughs the whole way through.

Nö Shöw begins in a straightforwardly amusing way, with a ridiculous song about boners, but soon transforms into something a whole lot more interesting. Russell and Michelides break down their own performances from within the show, frequently stepping aside to discuss how it is going. Different tangents show where the performers picked up their skills, and what they might be doing if they’d chosen a path other than comedy. Russell endeavours to hide the lack of audience from Michelides throughout, leading to some bizarre crowd work.

Russell and Michelides are talented performers and it’s a delight to see them on stage together. Both have an aptitude for playing characters and that is brought to the fore, particularly when Russell plays various members of the non-existent audience. The duo make for a good combination, Michelides’ caricature of innocent ignorance butting up against Russell’s brash, almost Vaudevillian demeanour. It takes a lot of skill to pull off a show that’s this high-concept and introspective without it disappearing up itself, and Russell and Michelides have absolutely proven themselves to be up to the task. Nö Shöw is consistently funny, undercutting the cleverness with goofy visual gags and a dash of crassness.

If you’re up for a bit of late-night weirdness, Nö Shöw is something different from two Golden Gibbo-nominated comedians and well worth checking out.