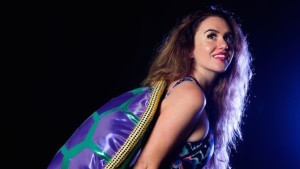 Space Tortoise has the perfect blend of music and comedic moments. The narrative centres around Brasier’s character Eric, a tortoise who although works in retail, dreams of becoming an astronaut. Armed with a wind machine, pink sparkly shorts and one heck of a voice, Brasier brings a strong wit and raw emotion to her performance. Some banter with ‘tech guy’ Dan and an introduction from an audience member brings the first few giggles of the show.

Often telling herself to ‘sing about it’, Brasier has packed the show with powerful performances including hits from Céline Dion, Prince and Adele. The musical moments build upon the narrative creating an enjoyable ride throughout. Not one to leave out the audience, Brasier finds interesting ways to connect with them. A game of ‘beer pong’ and a sing-a-long of the theme song from Dawson’s Creek, lends a hand in shaping a togetherness within the crowd.

Brasier’s quirky style brings a warm energy that could lift even the dullest of days. If you’re a musical comedy fan or a sequins enthusiast, this show is one for you.