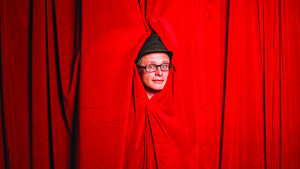 An unusual thing seeing Master of the Absurd Simon Munnery doing straight (as he can) stand up and I love it as much as his character work and his ultra-weirdness because Simon is funny to his bones.

Simon had a delicately worked out structure, from Dancing in the Dark House Music (The lyrics could be about a comedian plying his trade) to testing various potential openings (the chosen one being pretty damn awesome though), through thoughts of being on the road and industry experiences, to unabashed lefty political comedy, a big glorious prop and finally a little romantic comedy play in Yorkshire accents to round it off it is an intelligent, well put together and funny Festival show.

It was unfortunate that some rowdy shouty drunk dickwads tried to send it all off the rails. Shouting things like “Is he British?” and finally “Is this comedy?” to which Simon replied “Let’s take a survey. Who thinks this is comedy?” Everyone else in the room put up their hand. I think Simon handled it like a seasoned pro who’s dealt with worse things in his long career in comedy clubs and pubs in the UK. He engaged with them to calm things down, when that didn’t work he politely said “Anyone not enjoying the show can leave now” and remarkably, they did. I was lucky to be up the front so that it hadn’t affected my ability to enjoy most of the show so far and they were gone about 15 – 20 mins in, so it wasn’t too bad if you weren’t too close to them. But I was extra impressed at Simon’s relaxed ability to deal with it all, have a bit of a laugh with us about them after they left, and get on with the rest of the show. And it wasn’t Simon’s show, they were so drunk and stupid I don’t think any kind of comedy would’ve made them happy.

I’ve been seeing Simon Munnery perform since he performed as his own shouty League Against Tedium & Alan Parker Urban Warrior back in the day at the Prince Patrick Hotel. I always attended his legendary Annual General Meetings when in Edinburgh, but never had the time to hang out with him afterwards when he took the audience to the Pub or a gallery. I’ve loved his freaky Fylm Makker so check out his one night performance of Fylm School in Melbourne if you can, I’m sure it’ll be just as experimental, fascinating and fun. Alright, I am a fan. That’s because he is very funny, very endearing, always performs something interesting and unexpected and he is a bonafide comedy legend. Go see his shows.