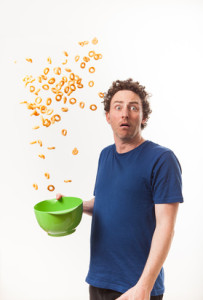 Liam Ryan has noticed a pattern in his life – the minute things start going well for him, a moment of horrifying embarrassment looms from behind to grab him, like a terrifying spectre. In OH GOD IT’S BEHIND YOU, Ryan recounts his hilarious tales of humiliation for our amusement. It’s a fantastic show that’s mortifyingly relatable.

Ryan has a rich tapestry of embarrassing anecdotes to tell, from a minor food-related accident to a full-blown fire emergency. Regardless of where the story falls on the scale of severity, they are all equally entertaining. There’s not a dull second in OH GOD IT’S BEHIND YOU. Ryan is a natural storyteller, capable of injecting suspense and hilarity into even the most run-of-the-mill occurrences. The story of his first attempt to flirt with a girl is particularly well-told – you can see what’s going to happen from a mile away, but Ryan’s wording still makes the outcome feel surprising. It’s as though you’re standing right there, watching the events unfold in slow motion.

Ryan is completely at ease on the stage. His delivery is pitch-perfect, striking a balance between rehearsed performance and casual conversation. The show also includes some very impressive musical accompaniment, provided by Ryan –and some less impressive musical accompaniment, provided by an audience member. As a whole, OH GOD IT’S BEHIND YOU is cleverly composed and consistently funny. I attended on opening night and already the show appeared very polished – a testament to Ryan’s skill and quick wit.

If you like your stand-up, OH GOD IT’S BEHIND YOU is essential viewing. It’s an hour of non-stop laughs from a performer that just keeps getting better every year.