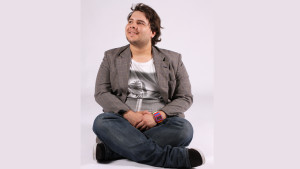 When we’re young, we’re idealistic – confident that if we put our minds to it, we can be our best and achieve anything. As we grow older, it can be difficult to maintain that naïve positivity as we are increasingly confronted by our own limits and those of society. In Rage Against The Man Child, Anthony Jeannot explores what it is to grow up and look at our lives through the prism of our younger self. It’s a bittersweet show about losing your optimism and regaining it in unexpected ways.

Jeannot tells thoughtful and funny tales from his life. He strikes a good balance between idealism and reality, setting a tone that’s ultimately uplifting without being overly saccharine. There’s a nice flow to the show. Using three points from a letter he wrote to himself as a teenager gives Jeannot’s tales a framework, and adds a feeling of narrative to what could have been disparate stories. A piece about his current role working in social media for a teen clothing brand was a stand-out and hilarious.

Rage Against The Man Child isn’t super polished. There are still some visible nerves in Jeannot on the stage and his material can at times become meandering – more akin to casual conversation with a mate than structured storytelling. However, this also adds a layer of vulnerability to the show that’s in keeping with the theme. Jeannot’s comedy is relatable and self-effacing, and had the audience chuckling throughout. He can certainly hold the attention of a crowd.

This is a fine work of stand-up from an up-and-coming comedian. Jeannot is entertaining, witty, and you even get a showbag at the end.