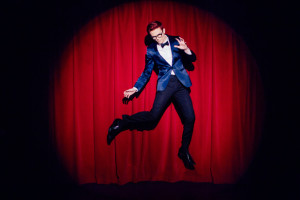 Rhys Nicholson, aka Mama Showbiz, is back in Melbourne with a new hour of stand-up in Bona Fide. It’s faced-paced comedy that barely gives you time to catch your breath between the punchlines, from an extremely talented comedian.

At 26, Nicholson’s noticing that his friends are starting to settle down, getting married and buying property. In the meantime, he and his boyfriend of six years are travelling for work and holidaying in France. They’d maybe like to get married at some point but, unfortunately, marriage equality still has a ways to go in this country. Bona Fide strings together a bunch of stories about growing up – from Nicholson’s teen years where he was figuring out who he was, to learning how to behave at weddings. Though the specifics of Nicholson’s material are not something many of us have experience with – most in the audience aren’t internationally touring comedians – Nicholson’s humour is very relatable. A section on his dealings with anxiety seemed to particularly strike a chord, getting big laughs from the room.

Nicholson’s delivery is perfect – sharp, witty and acidic. There’s not a slow moment in Bona Fide. Every single story, every little aside is perfectly placed. Nicholson struck up a good rapport with the audience, easily winning over those who had not seen him perform before.  He’s a natural on the stage and consistently hilarious.

Nicholson’s stand-up is just moving from strength to strength and Bona Fide is his best show yet. And if you bring along some cash, you can snap up a snazzy brooch after the show as a memento of the fun times.

Rhys Nicholson – Bona Fide is on at Roxanne and Melbourne Town Hall until April 17
http://www.comedyfestival.com.au/2016/season/shows/bona-fide-rhys-nicholson