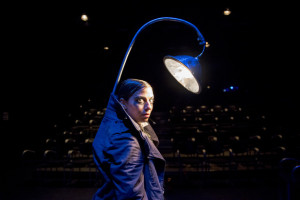 Sitting in the round, spread out in the dark, the audience waits for the appearance of Private Detective Butt Kapinski. The only light source is Butt’s personal lamp that travels with him around the room as he tries to solve some serious crimes. If you are a fan of old Hollywood and have always wanted to be in a sexy Film Noir, this is your chance.

Butt Kapinski is one of those full on immersive festival shows where the entire audience is cajoled into becoming a large part of the show, taking on characters, the scenery and even the jazzy musical score. Butt Kapinski is a delightful dippy character to spend an hour with and has a great set up for the show involving the seamy underbelly of a city and a bit of gender swapping which creates an exciting expectant atmosphere and our audience is bang on for joining in on the fun.

It’s just as well that the very talented American Deanna Fleysher is doing this now after so many Gaulier trained clowns have performed in Melbourne before her, so that Festival goers have become used to this sort of thing and are willing to go with it, because it would not be much of a show if the audience refused to play. I also wonder how she copes on a quiet night of four patrons. They would be pretty exhausted by the end. I’ve said before that I get annoyed when performers cross the line in audience participation and this happens tonight when Butt pashes a member of the audience, but although I felt uncomfortable watching, it didn’t feel as if he was too bullied into it as is often the case.

It is actually a lot of (mostly harmless) fun taking part in Butt Kapinski’s story, but stories have endings and Butt expects a bit too much from the audience to create a great finale for her. Tonight it doesn’t completely come off. When the audience did make up bits of plot throughout the show, it was up to Kapinski to improvise and weave them into something interesting, but that didn’t seem to happen a great deal and there were few exciting and clever call-backs to earlier characters or situations. It could just be an off night, or Butt’s excuse of being overwhelmed by the full on kiss, but my expectations from seeing other top improvised comedy shows were not fully met here.

A show for drama students or frustrated performers who want to get into the spotlight and for those who want to experience an interesting and entertaining interpretation of the current Gaulier inspired craze of getting the audience to make your show for you.

Butt Kapinski is on at The Tuxedo Cat