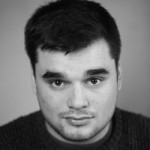 Red Richardson came to stand up from the world of internet videos a few years ago and this marks his second year at the Fringe. Unfortunately my hopes of seeing a fresh new stand up talent were dashed as this lazy show progressed.

The show started with a ten minute warm-up by fellow comedian Ed North, in which he basically chatted to the audience looking for something to work with. Then Red came on and delivered a 35-40 minute set filled with rambling stories which petered out without a punchlines, random racist and sexist comments, and self-deprecating comments about being from Devon, living in South London and being a twenty-something middle class layabout. It was the sort of routine you would expect to hear late at night in a London pub from someone pushed up on stage by his drunken mates.

If Red expects to make any money from this Festival, rather than just using the show as an excuse to party at the Fringe, he really needs to put down the bottle of beer during his (2.15pm) show and put a little effort into entertaining the audience (who didn’t get above a muted giggle at any point of the show). Disappointing.

The Red Richardson Experience is on at Gilded Balloon at the Counting House until August 29
https://tickets.edfringe.com/whats-on#q=%22The%20Red%20Richardson%20Experience%22