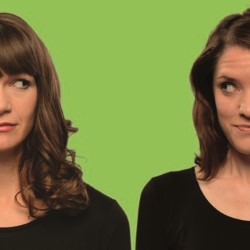 Hannah Croft and Fiona Pearce, the stars of BBC Radio 4’s The Croft & Pearce Show and Spirit of the Fringe award-winners, present an impressive hour of seemingly unconnected sketches that are gradually drawn together into a single kooky world of weird characters.

Their main recurring characters, Jean and June, are upper middle class conservative villagers suffering from the ruination of their world (mostly due to the existence of Aldi and modern technology). Around them we have an apparently loving couple running a village deli, a pair of Australian tourists (sadly I must admit their stereotype of the boorish Aussie tourist is quite accurate but I will not accept their dodgy accents!), a sex therapist and her class (in which the duo learnt the dangers of trying to embarrass a middle-aged Scottish gentleman in the audience who was much more excited than he should have been), a very disciplined Brownie troupe, a legal office with the daughter of the boss being a little too musical for the team and the breakdown of a relationship.

The duo use no props or costumes (apart from the occasional hat and some cue cards in the finale), and everything is well paced and co-ordinated. With barely a pause between sketches, there were plenty of jokes and comical activity for the full house to enjoy. An hour of fast paced and well thought out comedy from a couple of rising stars in the comedy world. Will sell out (if it hasn’t already).

Croft & Pearce Are Not Themselves is on at Underbelly, George Square until August 28
https://tickets.edfringe.com/whats-on#q=%22Croft%20%26%20Pearce%20Are%20Not%20Themselves%22