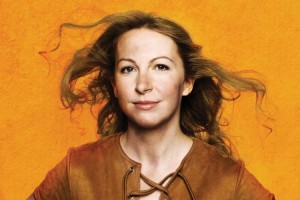 Jen Collier is from Wales but is now living in London. She may be petite, over thirty and single, and have worked in a number of really crap jobs (such as a call centre and as a sales assistant in the poshest bathroom showroom in London), and have a slightly unhealthy obsession with bodily noises, but politeness dictates that I should refrain from confirming these scurrilous facts. Jen may also have a liking for multiple free breakfasts while on comedy tours, problems with acting school and saying the letter “s.” You’ll just have to see the show and hear her own hilarious account of these things.

While it can occasionally be awkward to be met and farewelled by a comedian as you leave a small gig, its always lovely to be greeted and warmly welcomed as you enter. Jen created a great atmosphere for her comedy from the outset and this congenial mood is maintained throughout. There was an apologetic confession that she hadn’t actually seen the film her show title is based on (Ben Hur) until very recently, but there was a lovely big comedy prop to induce laughs and make up for this tardiness.

If you have a fondness for bad puns Jen’s your comedian, a brilliant wordsmith, she also has great fun mucking about with a little Latin and Welsh. The audience enjoyed the show and joined in (sometimes a little too enthusiastically) when asked. A good fun hour of stand-up and story-telling from a talented performer.