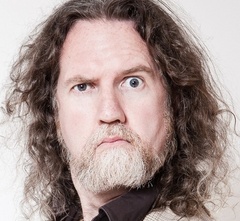 In his show Dave Callan showcases some of his most interesting calls and experiences from his time working the night time or Graveyard Shift.

In a nutshell, if you are looking for some simple, uncomplicated laughs then this is a show for you. Many laughs are to be had at the expense of Callan’s middle of the night clientele, who range from the obviously drug-altered, to the downright odd and unexplainable. Excerpt recordings of actual callers are played, along with a slideshow of (in some cases quite necessary) subtitles. Certainly the material is unique and showcases a rare event where the majority of the humour comes from people who are neither trying to be funny, or even present for the show. It must be said that although a large portion of the act is spent listening to audio recordings while Callan stands silently, this does not detract from the quality of the show. Callan’s commentary and clever interplay really “make” the performance. That being said, the utter truthfulness of the show is horrifyingly hilarious. Knowing that who you are hearing are real people, with real thoughts is a little worrying from an evolutionary perspective.

Callan also gives a short history and description of exactly what Triple J is all about, some of the people he has worked with there, and the inherent risk of working with said people. Interspersed amongst the recordings are some games involving a fair amount of audience interaction. The entirety of the show had an informal air about it for that matter; Callan speaking very conversationally and obviously knowing his audience well. There is a real sense of being allied with Callan against the absurdity of some of his callers, a mutual feeling of complete bamboozlement at some of the things Callan obviously had to endure.

This was only a preview show, so of course there were some obligatory teething problems, but surprisingly few and nothing that really stopped the show. A few abrupt segues between sections of his act and one or two minor technological glitches that had to be endured were handled very well by Callan who kept the audience entertained throughout.

For simple, unadulterated humour at the expense of strangers, coupled with some killer dance moves, you cannot go wrong with Dave Callan’s Graveyard Shift.

Dave Callan’s The Graveyard Shift is on at The Portland Hotel.