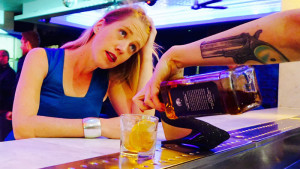 The audience is welcomed to the intimate space by Gabe’s warm up guy who we later found out was David Tulk. Warm and friendly, he chatted to the crowd and told some jokes, but if he’s not going to do her tech, Gabe doesn’t really need him. Gabe is very capable at carrying a show on her own and if she’s worried it may be a bit short; as I always say – a shorter festival show is better than a longer one.

There is a lot to unpack from Gabe’s midlife crisis, leaving an unhappy, long term relationship and finding herself single in a share house with three less-than house-trained, crazy artistic blokes while trying to make it on the Melbourne comedy scene. She has some rather hair-raising and hilarious tales about scary people she meets at gigs and is also able to find the funny side of modern dating without the easy clichéd tinder jokes.

There were a few things against this show working on the night I was there; her entire family in the audience making unnecessary interjections and cramping her style somewhat, a tiny squashed venue with a spotlight attached to the back of the door which meant that anyone leaving or entering the room couldn’t help but distract from the show, inadequate tech (no room for a techie anyway) so that the room is lit too brightly and Gabe has to fiddle with the house music herself. But impressively Gabe sailed above all of this like a trooper who has put up with a lot of crap at all sorts of gigs and can now deal well with anything thrown at her and keep the audience captivated. Brava!

Gabe has gained confidence in her stand up over the past couple of years. When I saw her effortlessly host a fairly small comedy night one evening I was impressed and it made me seek her out elsewhere. Gabe Hogan is definitely on her way to better things.