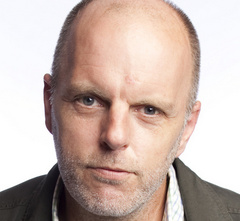 Heroes – performed by Greg Fleet started off in the strangest way. Fleety starts siting on chair in a low light and in a very pained and reflective voice, begins to tell a story about the demise of SuperHeroes, Fleety’s failed attempts at being one and the unfortunate suicide of Superman. No-one really knew how to take this dark and serious monologue but thankfully it passed and the real Greg Fleet stood up!

I’ve seen Fleety do stand-up more times than I can remember and he’s never let me down. This stalwart of the Australian Comedy scene has been telling stories in his special Fleety way for almost 25 years and I’ve only once heard the same heckling story – that is a brilliant comic library!

The show is essentially about the people that Fleety puts up on a pedestal – his Heroes. The air hostie telling it like it is and the drunken taxi driver. There some cracking stories of his personal, bravery attempting antics; like taking on the Thai mafia and a strange tale of a Peter Parker Spiderman like effort on St Kilda Road. After a while though, the stories tend to lose their flimsy ties with the heroic back drop and just become amusing stories. All that aside, they’re told by Greg Fleet – so it could be about paint drying and it would still be gold.

The creepy monologues could be axed from the show. They didn’t really fit and left a really strange post-show mood in the room. They were the start, middle and end – perhaps there was a deeper morale story there somewhere. No idea what he is trying here but it didn’t quite work.

It must be said – once a Fleety fan, always a Fleety fan. He’s managed to change it up and keep it entertaining for this long, even through a self-proclaimed “drug hobby”. If you haven’t seen him before – get involved; and if you have, you know you won’t be let down.

Greg Fleet is performing Heroes in the Council Chambers at the Melbourne Town Hall.