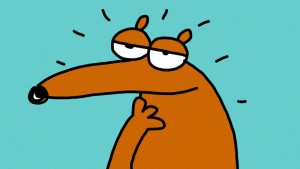 National treasure First Dog on the Moon has returned to Melbourne Fringe with the next installment of his touring PowerPoint presentation – A Further Other Evening With First Dog On The Moon. It’s an hour of spoken word and and projected imagery that’s just as hilarious and incisive as his regular political cartoons for the Guardian.

This time around, First Dog puts forward his case for changing the world via the medium of cartoons, promising to teach the audience all that is needed to go pro in the medium. It’s a show that’s both instructive and funny, and it’s really interesting to see First Dog break down his work and what makes it effective. An in-depth look at his cartoon on cassowaries was particularly great, illustrating the positive effect humour can have in raising awareness.

First Dog presents a very likable persona – helped along by his utterly adorable shark costume – and won over the audience easily. He makes PowerPoint engaging, working like a double act with his images. At times, First Dog plays the foil to his cartoons’ absurdity, the audience cackling with laughter as a bucket-headed Tony Abbott peeps up unexpectedly on the screen. The tone of the show is well-balanced. Although the topics First Dog covers are often on the serious side, he never comes across as preachy or strident. The world around us may be dire, but the overall message of A Further Other Evening is hopeful.

If you’re a fan of First Dog On The Moon’s work, you’ll absolutely love this show. It’s sweet and funny, yet biting when it comes to politics. Not only will you laugh, but you’ll come away having learned a lesson on how to spread a bit more niceness in the world.