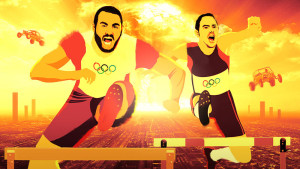 In spite of a nuclear Armageddon, the human race must carry on… competing in events such as skiing, “What’s in this box?” and “Greg” as part of the tenth ApocOlympics. Justin Porter and Dan Pavatich bring us this romp set in a bizzaro alternate universe which is a tonne of fun and has laughs aplenty.

The story follows a number of threads that are all interconnected. We see the stadium construction, media coverage, journeys of individual athletes and even a twisted hero’s journey into the wastelands. There is some satire about the organising bodies of the modern Olympic Games but this is mostly the story of eccentric people trying to get by in a world gone mad.

Porter and Pavatich do a great job in bringing this huge cast of wacky characters to life. Porter brings a manic energy to all his roles, almost every one of them is suitably boisterous and larger than life. Pavatich’s are usually more subdued but he can turn on the crazy when needed. As they use no props or costumes, working out who’s who in a scene is a little tricky. With so many characters it takes someone to the address the other by name for you to realise where we are in the story. Once you have that sussed, the plot is a breeze to follow as everything is chronological.

The tiny stage means that dialogue trumps physical humour in this show and there are plenty of hilariously offbeat exchanges that fit in perfectly with this strange yet familiar world. All the scenes are relatively short as they flit from one storyline to the next, progressing things at a decent clip and keeping it punchy and tight. The only complaint is that the conclusion concentrates so much on tying up all the loose ends that we leave with a warm fuzzy feeling rather than split sides.

If you’re in the mood for some end of the world silliness, this wonderfully wacky play is a hoot.

ApocOlympics is on at The Tickle Pit at Fancy Hanks until October 2
https://melbournefringe.com.au/program?event/apocolympics/aca0e452-1e85-43f6-a9a2-9a5a44b64560