It’s hard to think of any great positive things that happened to the world in 2016. Apart from the odd sporting achievement, it was a nonstop pileup of deplorable crud. Australian comedy however didn’t let us down, delivering performances that will stand out, no doubt, for years to come. So to cheer myself up about the dreadful year that was I thought I’d just do a roundup of good things that happened in Australian Comedy this year.

It always brings me joy to see good comedy coming out of TV, I can remember when I would be rolling in the aisles to so many comedians on stage and felt so frustrated that their voices were not heard on TV except occasionally on the odd panel show. It was one of the reasons I set up this site. I wanted the world to know how wonderful Australian standup comedians are. This year it was so satisfying to see so many live standup performances on TV shows such as Comedy Next Gen and Comedy Up Late as well as the usual Festival Galas and Just For Laughs specials. We saw comedians working in different formats like The Katering Show, Sammy J’s Playground Politics, Who’s Line is it Anyway Australia and Hard Quiz. It’s exciting to watch Comedy Showroom give fresh comedy ideas a go and to see the sweet sitcom Rosehaven bloom so beautifully. Sitcoms have always been so bloody hard to do successfully in Australia and this year we’ve also had Here Come the Habibs doing well on 9 of all places and Upper Middle Bogan as strong, funny and heart-warming as ever in its third season.  This is all along side regular shows such as Mad As Hell, Julia Zemiro’s Home Delivery and The Weekly.  There was happily too much comedy on TV for me to cover properly but I’ll leave that to the TV websites. Just to say 2016 was a great year to see Australian standup comedians doing exciting and wonderful things on TV and of course beaming around the world online.

Meanwhile comedians on stage have been creating astonishing, hilarious work. I didn’t get to see everything, as usual, it’s just impossible, but I thought I’d share some of my own personal highlights of the year.

The Melbourne International Comedy Festival was celebrating 30 years as a Thing and put on a fun party for comedy fans with shows such as Cal Wilson’s Sunday arvos at The Victorian Arts Centre speaking with different generations of comedians in The Decades That Were and comedy tours with Rod Quantock.

Also at the Festival this year was The Wedding of Zoe Coombes Marr and Rhys Nicholson. There have been a few great comedy weddings over the years, but this riotous spectacle which was making a clear statement in support of same-sex marriage could not be bettered. The bridesmaids were Denise Scott, Judith Lucy and Celia Pacquola, MC Hannah Gadsby made a fabulous funny and moving speech. The Priest was Geraldine Hickey, Celebrant Ben Noble. Entertainment was provided by Tina Del Twist, Peter & Bambi Heaven, Hot Brown Honey, The Daredevil Chicken Club, The Butterfly Glee Club, The Royal Melbourne Philharmonic and Melbourne Uni Choirs, Wil Anderson, Adrienne Truscott and The True Australian Patriots.

Other general comedy highlights were laughter filled Sunday afternoons at the live podcast recordings of Josh Earl’s Who Do You Think I Am?  There was the return of The Bedroom Philosopher at Local Laughs singing about haberdashery and a reboot of The Doug Anthony Allstars. Tripod celebrated 20 years on stage with a gift of their songs in book form and performing them with guests on stage, ending the year with one of their best Christmas shows ever. The new exciting discoveries in 2016 included funny musical acts Jude Perl and Sarah Wall & Freya Long of The Astrudes, then the astute, warm, political comedy of Sami Shah, Alanta Colley and character comedian Haley Tantau as her alter ego Cindy Salmon.

Finally, as is traditional, I’m including an End of Year List; 5 Very Good Festival Shows of 2016. As you can imagine it’s hard to pick out only five great festival shows for the whole year, its been a really great year for live comedy. 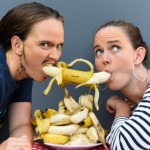 1.  Zoe Coombes-Marr Trigger Warning. (MICF) The show captured the zeitgeist of the comedy world. I was laughing so hard I was worried I’d lose control of my bodily functions. I literally fell off my seat at one point. So many thoughts I’ve been thinking that she wrapped up and detonated. She destroyed me and remade me as a stronger woman. It won the Barry Award for best show at the 2016 MICF and deservedly so.

(Thanks to modern technology and smart TV people it’s been filmed and you can probably see it on ABCiView as part of Comedy Next Gen, not quite the same as live, but do it. WATCH IT. Then watch all the others) 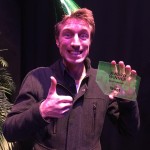 2. Sammy J – Hero Complex. (Melbourne Fringe) Sammy has been wowing audiences for years, but this one had the audience whooping and cheering with pure joy. It’s about the love of unpopular nerdy pursuits, in this case a passion for The Phantom comics and a friendship borne from that. The show is full of secrets and reveals, so it hard to say more except that it is gobsmacking, weepingly hilarious and will have you grinning for hours, perhaps days afterwards. This won Best Comedy at the Melbourne Fringe Festival and will get a run at festivals in 2017 so DON’T miss it. 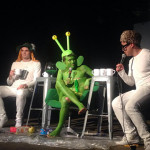 3. Zanzoop – Feeble Minds. (MICF) Who knew a late night show in a rundown night club about an alien chat show would become the talk of MICF? All three performers added their amazing talents, my highlights being Aaron Chen as Owen Wilson with Tom Walker as Jackie Chan and the heart-warming family reunion of snarky host Zanzoop (Sam Campbell) and his alien dad (Cam Campbell) at the end.

4. Micheal Williams: An Evening with Michael Williams (who is trapped under a boulder) – with Jack Druce. (MICF) Michael has moved from delighting us with his clip board of sophisticated cartoon humour to giving us an all singing, all dancing audio visual extravaganza and puppet show. 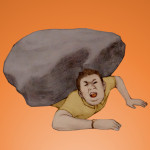 A delightfully silly show had the audience gasping when the boulder suddenly came to life and was fun for the whole family. Michael has received a 2017 Moosehead Award, so am looking forward to his Moosehead show in 2017!

5. True Australian Patriots (MICF). Noticing in the MICF programme that three of Australia’s most promising comedians had teamed up to lampoon right wing protest groups had comedy fans very excited and we were not disappointed. Anne Edmonds,Damien Power and Greg Larsen are all at the top of their game and gave us a riotous late night of political satire and bizarre love triangle that hit the perfect tone and bashed us right in the comedy solar plexus. 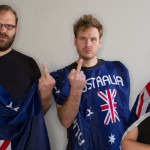 Happy Hogmanay from the Squirrels and hoping 2017 brings you more laughs than sorrow. X