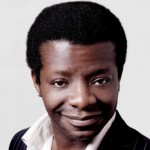 Ok, Stephen’s been around long enough that most of you already know what your getting at a Stephen K Amos gig, a bloke who’s extremely comfortable on stage, as witty as they come, and a razor sharp audience badgerer. You’ll get it in bucket loads in his new show Laughter is my agenda.

Taking a similar formula as to shows of previous years, Stephen dissects and explores what it is that make us, and himself, laugh. Picking up his yellow clipboard, Stephen proclaims if a joke is funny, it get’s a tick on his list and stays in the show. And I guess if a joke’s not funny, then it’s out, but i don’t recall anything getting the chop. With such a transparent approach to the whole stand-up thing, the audience is immediately on-side and primed and ready to watch Stephen push his own agenda.

Stephen tackles topics such as race, local politics, family matters and his childhood, not groundbreaking stuff, but still hilarious and only amplified by Stephens wit and charm. But it’s Stephen’s audience interaction that provides the biggest laughs.

You can tell Stephan has a genuine interest in people and the human psyche. His retelling of an encounter with an aboriginal man who was offended by a joke he’d told results some exploration of such themes, and adds a bit of depth and intelligence to the show. More highlights include the reading of a baffling Townsville show review and some strange blues music at the end of the night.

Yeah, Stephen does tread old ground here and it would be nice to see him push himself a bit more, but hey, if it if it aint broke, why fix it? If you’ve seen him before, maybe try something new, but if you haven’t, Stephen K Amos is essential viewing.

Stephen K Amos is performing Laughter is My Agenda in the Main Hall at The Town Hall.