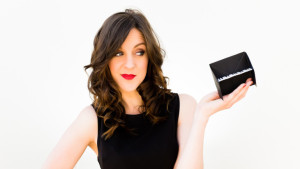 Gillian Cosgriff has a problem—she is a procrastinator. Like many of us, she finds the endless warren of information online a source of distraction that leads her astray from doing all the mundane tasks she actually needs to focus on, like doing laundry or writing new material for her shows. So, in November last year she set herself the project of writing a song a week, for 8 weeks, and the result is this fun filled hour of cabaret.

Gillian’s friendly manner had the audience on side from the start with the upbeat opening number Totally Fine, about her procrastinating ways and turning 30. Each of her weekly musical offerings are played through in the order written, and range in theme from those funny Night Thoughts that keep you from getting to sleep, to the more sentimental December the 23rd, about the anticipation and traditions of her family’s Christmas. By the third song of the set Gillian easily gets the audience to join in with her with some chorus call back.

Song highlights included Regular Lady (Goes to a Nightclub), a non-party animal’s party anthem, to counteract all those Bruno Mars confidence-hoarder types; and Finding Felicia Coco, in which a chance encounter with an exotic name in her inbox fed imaginative tales of who Felicia may be, and what fantastic life she might be having.

Along with the 8 songs she had created during those 8 weeks, Gillian takes suggestions from the audience to create an improvised song, performed near the end of the show. Tonight it was an audience member Edina’s birthday that provided the inspiration. In between songs and banter Gillian chatted to Edina and her daughters about what she liked, and deftly incorporated a sushi dinner, tree top adventuring, and Heston Blumenthal cook books into a fun personalised song. Gillian mentioned that the previous performance she was given the topic of menstrual cups, so you never know what the song may be. It is great to see her show off her solid improvisational skills.

Gillian proves that while procrastinating online might be her weakness, all that time following fun facts on the Internet has been useful after all, with the weird and interesting stories she’s come across inspiring laughs and providing the inspiration for her songs and spoken performance in a delightful way. Much like following links on the web you are led from ghost ships, to righteous Facebook posts, to beauty tips that just may not go as well in real life as the internet might have you led you to believe.
8 songs in 8 weeks is a joyful hour by a confident performer.