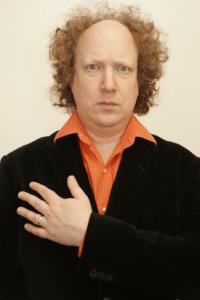 Alternative political comedian Andy Zaltzman starts with the jokes before the show even officially begins. A miked voice from behind the stage delivers a pre-show preamble, encouraging incoming patrons to find a seat, switch off their phones and unplug all landlines. The voice-over continues with a self-deprecating apology to long time fans for there being a large audience when they should be used to having a row each themselves. The in-show warnings and apologies increase in absurdity until the laughs are large. The audience are well and truly warmed up by the time the doors shut and it is time for Zaltzman to hit the stage to an extended ringmaster-style intro.

Some initial audience banter establishes that there is a large percentage of the crowd who are already familiar with Zaltzman through his long running podcast The Bugle, which provides a chance for some ribbing of his former co-host John Oliver.
Zaltzman covers all the bases you may expect from the current news cycle, quickly moving back and forth through Brexit, Syria, and Trump. Sound clips and some fruit and veg props aid the laughs as he delves into Trump’s brain, Australian news headlines, and Australian politics with a soft toy Prime Minister Turnbull making an appearance.

The subject matter could have the potential to be quite bleak or overused, but the laughs are steady and the mood is kept up with a loose performance and just enough moments of silliness. Zaltzman mixes metaphors and creates juxtapositions to great effect, hilariously comparing our immigration policy to AFL, explaining why test match cricket is akin to reading novels, and also—by taking a quiz with a sceptical audience member—proving that the best thing in life is probably sports.

The audience were primed from the moment they entered the room, and Zaltzman delivers with a rewardingly fun hour full of sharp gags and satire.

Andy Zaltzman : Plan Z is on at the Town hall until April 23rd
https://www.comedyfestival.com.au/2017/shows/andy-zaltzman