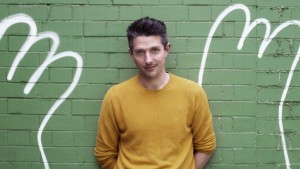 From the outset Stuart Goldsmith states that Compared To What is an hour of him learning not to be so self-obsessed. It is also the show that most new father comedians write after the fruit of their loins enters the world. He merges both themes seamlessly and puts a unique spin on many familiar topics such as parents becoming social shut-ins and the challenges of keeping your offspring alive. He has plenty of brilliant material that even those young people without children will find delightful, relatable and hilarious.

Observational storytelling is his stock in trade so he has plenty of fascinating and witty views of the world to weave through a narrative of events in his life. Stuart is a very slick performer who expertly guides us through his emotional journey. He keeps the audience on side even when his material doesn’t always paint him the most flattering light; he’s such a likeable guy.

Some of his clever lines are creepers and he tends to jump on us when we don’t immediately react but it’s done in good humoured jest. Stuart is also happy to acknowledge distractions in the room and gives them nice witty quips before quickly getting back on track. He regulary analyses the show out loud which makes me wonder if he’s just ironing out the kinks in this run (he mentioned differences in audience behaviour here compared to the UK) or if this is the way he normally works; always the perfectionist who’s trying to hone his performance on the fly. Either way, this gives the scripted performance an enjoyable looseness. Everything about his delivery seems to be relaxed with an ebullient desire to convey this wealth of material to the punters.

There is plenty of colour and movement in this stand up set to enhance the delivery. Exaggerated gestures are used to drive home points and he playfully acts out those supporting characters in his tales with a line or two. He is far from static and owns the stage.

You’ll enjoy the ride as Stuart asks himself some big questions, comes to compromises and hilariously examines the dilemmas of becoming part of a family. This is solid funny stand up from an accomplished practitioner.

Compared To What is on at the Greek Centre until April 23
https://www.comedyfestival.com.au/2017/shows/stuart-goldsmith-title-tbc