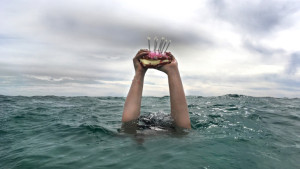 It seems that the ravages of 2016 have affected the comedians of this years MICF deeply. So far the majority of shows I’ve seen have been about fear and anxiety. Laura Davis’s show is about the world disintegrating around us like a cake in the rain.

Laura has developed in leaps and bounds as a comedian since moving to Melbourne from Perth. Her first show was based on her life and health issues which explain why there is a sense of fragility to her standup style, but what has emerged over the years is that not unlike Wolverine she has a backbone of Adamantium and a mind like a steel trap. Laura’s best work has a political edge that can produce an audible jaw drop from the audience with cutting lines that can suddenly and unexpectedly stab you in the solar plexus.

Laura’s show rages against the hallmarks of the approaching apocalypse and not always at the usual suspects. She hates the dumb supercilious doomsday preppers who haven’t really thought it all through and our own smugness in thinking that we as Australians are better than America or the UK when in fact, we have our own issues we should be dealing with. Laura has learned firsthand how wealthy companies won’t pay their staff properly through hilariously horrific sounding gigs she has had to turn down. The impressive part is how Laura has such a unique and hilarious take on all of these things.

I don’t like comparing comedians but at the moment I would compare Laura to Wil Anderson. Laura is that good. She can wrangle an audience into submission and have them eating out of her hand. She has her own refreshingly unique take on the world that is hilarious and at times devastating in its honesty. The underground bunker vibe of Fort Delta is perfect for the post-apocalyptic admonitions of Cake in the Rain, but it is clear that the astonishingly talented Laura should be in massive rooms playing to Wil Anderson level audiences.

Laura Davis’ Cake In The Rain is on at Fort Delta until April 22
https://www.comedyfestival.com.au/2017/shows/laura-davis