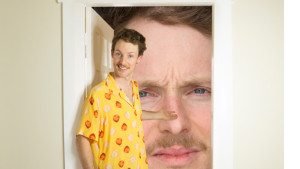 After being nominated for Best Newcomer at last year’s MICF, Guy Montgomery is back with his likeable, boisterous style of stand-up in Let’s All Get In A Room Together. It’s a delightfully silly, crowd-pleasing hour from a confident performer.

Montgomery is at his best when he’s riffing in between his longer chunks of storytelling. His patter up top about the room, his fancy water and the joys of the Yarra River was hilarious and grabbed the attention of the audience early. There’s no particular theme to Let’s All Get In A Room Together. Montgomery discusses a whole range of topics, from his accommodation situation here in Melbourne to his sexual awakening as a young boy in New Zealand. It’s all delivered with a level of enthusiasm and energy that’s utterly contagious. Montgomery had the sold-out room chuckling the whole way through.

There were a few minor bumps in what was otherwise a very strong show. Some of the stories in Let’s All Get In A Room Together strike an odd tone – they’ve got enough weird details to be unbelievable but don’t push that weirdness hard enough to be completely surreal. Another discordant note came about three quarters of the way through the show, when Montgomery told a joke that neatly tied up all the threads he had discussed so far. It felt like a natural ending point, so when the show continued on it felt overly long, despite the material in the final minutes being of quite a high quality.

Let’s All Get In A Room Together is thoroughly entertaining and Guy Montgomery is a stand-up with a lot of promise. Pacing quibbles aside, Montgomery has got buckets of charisma and will no doubt get bigger and better in coming years.

Let’s All Get In A Room Together is on at The Forum Ladies Lounge until April 23
https://www.comedyfestival.com.au/2017/shows/let-s-all-get-in-a-room-together