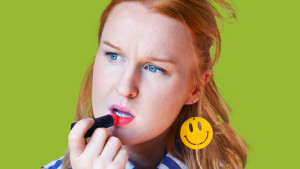 Natalie Harris decided the bestow the nickname Dragon on herself and persisted with it until her mother referred to her by it. In her third solo Comedy Festival show she explores the realities of living up to this moniker with amusing anecdotes, presented with all the bravado associated with being Dragon.

This is a show about image, expectations and personal development in which Harris manipulates her own to great effect. Presenting us with this alpha female persona of Dragon, cracks soon appear in the facade. This drip feeding of the “real Natalie” happens subtly throughout the performance. It isn’t pushed to its extreme for the huge comic effect she is probably hoping for but pushes that narrative along nicely.

Harris plays the role of Dragon brilliantly; uber confident and always right, even when she contradicts herself. It’s not as aggressive as you would expect and perfectly sets her up as a buffoon we can laugh at. She’s at her hilarious best when she rails against small first world problems and coerces us into accepting her skewed points of view. She even goes to the extent of providing physical evidence for her experiences which adds an amusing “trying too hard” element to this unreliable narrator. When she polls the audience for our opinions they are comically brushed them off as she clearly knows better.

There are a few quiet stretches that are more straight confessional musings or factual statements rather than funny lines. These don’t have us rolling in the aisles but it certainly has us paying attention. Not every one of her ideas lands but those that do are doozies. Witty pop culture references used to cleverly punctuate her points work well and various throwaway lines add some unexpected surprises.

Dragon is solid hybrid of stand up and theatre that keeps everyone riveted to every word.

Dragon is on at Trades Hall until April 23
https://www.comedyfestival.com.au/2017/shows/dragon