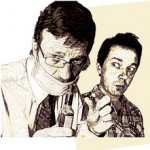 When word got out that the urbane Sir Bob Franklin and Steven Gatesy Gates from Tripod were teaming up for a festival show this year, you could virtually hear minds boggling all over town. If you enjoy having your mind boggled, this one is definitely for you.

The delightful and surprising thing was discovering what a great team Franklin and Gates make; with Bob unsurprisingly as the straight man and Gates as the comic side kick. Gatesy has taken his dumb and cute character from Tripod and augmented it to the point where he occasionally reminds me of Ardal O’Hanlon in Father Ted in being able to elicit laughs from looking confused. Their banter is the highlight of the show and their ability to deal with the odd technical fault gets such huge laughs that maybe they should leave those bits in.

Stubborn Monkey Disorder is a very tech heavy theatrical piece that sets up a spooky, gothic vibe by beginning in the dark with torchlight and sound effects. The opening creates the expectation of a horror story, especially with the brief flash of one of the performers in a wolf mask that suggests a werewolf story, which sadly never eventuates. There are definitely Hammer elements throughout though, with references to sinister doctors, dungeons and the tale of grave robbers Burke and Hare. The surprisingly satirical elements, especially when having digs at reality TV and the TV industry as a whole, are particularly gleeful.

The problem with the show is that are were so many plots over lapping and interweaving that it can be hard to keep up. There is a dream sequence within a story in particular that feels superfluous as I expected it to be somehow tied in at the end, but it is not. The Meta story involves Gates, having recently performed a failed reality show with Franklin, breaking into the studio where it was filmed. He discovers that Franklin has taken on the persona of a Scottish psychiatrist Dr Hugh Knox; with Gates and the audience suddenly finding ourselves taking part in a group therapy session. I think. I suspect this is a sort of re-enactment of their failed reality show, but it’s not quite clear.

Importantly, Bob Franklin and Steven Gates are so damn funny and adorable and the stories so intriguing and amusing that if you are fans you should not miss this and anyone else will probably have a fun time even if they’re not sure why. I don’t know if it’s a concious influence on them but I think Inception has a lot to answer for.