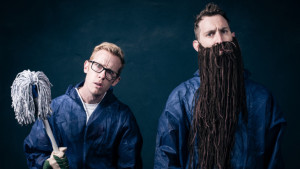 Frank Allen (Shane Adamczak) was minding his own business, working as a janitor in a laboratory, when he was accidently shrunken down and found himself stuck in the beard of Al (St John Cowcher). Over the course of eighteen months we see this pair stumble their way through the drudgery of dead end jobs, the pitfalls of starting and maintaining a relationship, and the threat of evil scientists in this strange and hysterical buddy comedy.

This two hander is staged with Adamczak occupying one half of the stage with Cowcher on the other, each within their own space: Frank in the beard and Al in the larger world. We often switch from one location to the other to obtain different viewpoints of the story with plenty of detailed and humorous commentary and exposition. They also take turns in playing supporting characters; swapping those roles at will with some clever explanation for the change in casting.

The structure of the story is especially impressive. Regular flash-forwards to an action sequence creates sizzle and has us expectantly wondering “how do our heroes get to that point?” Some plot points are economically covered as they trust their audience can fill in the gaps better then they can enact it on stage with their limited time and resources.

It’s a very physical story with the guys unafraid to make themselves look silly. The pair throw themselves around the stage and mime their hearts out to bring this bizarre tale to life. They work together brilliantly, hitting a number of audio and lighting cues with ease. They manage to fit in a bit of adlibbing to try and force the other to corpse which is rather indulgent but fun to watch.

There are a number of brilliant hilarious tunes slipped in at appropriate parts of the show. Unlike musical theatre numbers that advance the plot, these songs freeze the action to describe the emotional state of one of the characters. They manage to pack plenty of amusing ideas into each tune so you’ll be tapping you toes as well as chuckling along.

The Ballad of Frank Allen is wholly original piece of comedic theatre. Do not miss out on seeing this riotous experience.

The Ballad of Frank Allen is on at The Butterfly Club until April 9
https://www.comedyfestival.com.au/2017/shows/the-ballad-of-frank-allen