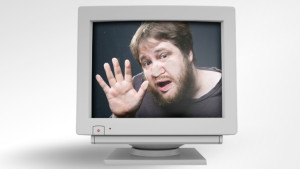 For the past 23 years, Michael Williams has been trapped inside the computer program Hello Learning 1994. Here he has lived with his captor / friend Jobe The Globe in begrudging peace…that is before the bugs started taking over. Combining animation and live acting, Williams takes us on a hilariously wild and ridiculous ride as he performs his Broadway stage show about Colonel Harland David Sanders (what else is he gonna do with his time?), introduces us to his famous historical friends and heroically fights computer bugs.

It wouldn’t be a Michael Williams show without lots of pop culture, celebrity and movie references, and this 90s theme lets him include many from that time period. We get an amusing nostalgia trip in the midst of a wacky story that also manages to get in some witty digs at the modern world.

Williams has set himself the gargantuan task of performing to a rigid script with audio and visual cues that need to be hit exactly; a far cry from his usual ramshackle delivery that we know and love. While he does tend to drift from the scripted words and comes in early with physical gestures he tends to get laughs from them with a well placed look of comical frustration. Along with his appropriately dishevelled appearance (you certainly wouldn’t look spiffy in the same situation) it allows him to exploit the lovable loser aspect of his stage persona for both sympathy and chuckles.

His program design combines his signature animation style with the layout of these types of software titles with a brilliant attention to detail. The encyclopaedia entries are quite comprehensive which contain lots of amusing misinformation and jokes relating to the story. You often wish that you could pause the show to read through them all. He has created a wonderful lived in universe that has a clever logic to it and a beautiful frozen in time aesthetic.

This ambitious and satisfying performance is a tour de force in lo-fi / hi-tech, all singing and dancing, animation / live action mashup. It’s impressive in its scope, often poignant and regularly gutbusting. A perfect way to spend your time at the festival.

Escape from a 90s Educational CD-ROM! is on at ACMI until April 23
https://www.comedyfestival.com.au/2017/shows/escape-from-a-90s-educational-cd-rom