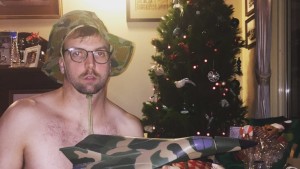 Luke Joseph Ryan has got one of the more interesting show names in the festival this year. Merry Christmas ISIS is a hell of a title to backup, and Ryan just about manages to do it. It’s a show with plenty of laughs, but also a few hiccups along the way.

Merry Christmas ISIS starts out strong with a delightfully weird, thematically-relevant musical opening, before leading into some solid stand-up. Ryan’s material on everything from balding to swimming pool sanitation to sword-loving relatives is wonderfully funny. Some jokes dance on the border of good taste, and Ryan delights in these moments of discomfort. He’s got a cheeky persona that keeps you on-board, regardless of the topic.

The show gets a little meta at times. Some things go wrong and it’s clearly all a part of the act, but then other things go wrong and you’re not quite sure if that’s part of the joke too. It all became a bit blurred by the fact that the room was filled with Ryan’s friends and then me, a lone reviewer, and so the show took on a more casual tone than perhaps was normal. Every now and then Ryan would mention that the show wasn’t going all that well, which again, may have been part of the joke but it disrupted the flow of the gig. What was intended as self-deprecating humour fell flat, as Ryan pointed out, because his friends showed genuine concern – unlike a regular audience.

Merry Christmas ISIS is shambolic but fun. There’s some great jokes in here, but the show could benefit from a little more structural clarity and a little less self-deprecation to ensure they really shine.