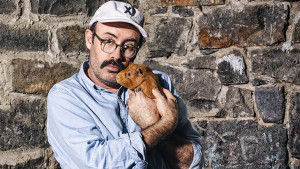 Sam Simmons is known for his wacky, nonsensical comedy, and he certainly doesn’t fail to deliver with that again in A-K. The premise is that a reviewer in the UK said Simmons could read the phone book and still be funny, so A-K is ostensibly based on that to see if that’s true, but it is also, he says, a show about badminton, and future technology.

Simmons moves through subjects quickly combining visual gags and non-sequiturs. At times he toes the line of being offensive and he jokingly berates the audience if they don’t seem to get it. It’s something for later, he assures us, and if we walk out we will miss that. And throughout the hour we do see the reason behind the madness.

There’s interrogation of the audience members when they leave to use bathrooms, which seemed to happen quite often during this particular performance. This gives Simmons a chance to do some small bits of impro, though at times these interruptions seem to be a distraction and he quips, “this is why I’m not on Whose Line is it Anyway”.

Suburban shopping centres provide an anchor for stories; generic food court Asian food, grannies on a day out, and how he met his wife in a shopping centre car park, which leads to now: seven years on they have just had a daughter. Like many new parent comedians his show addresses his new parenthood status. The musings and antics turn to nipples, other Dads’ advice, midwives and a fantasy giant slip and side adventure.

Simmons is thinking about his legacy now he’s a father, but he has not abandoned the silly stage antics the idiosyncratic performance style featuring voice-over gags, random acts of silliness and unflattering costume changes that his fans love.

Simmons opened the show warbling an aria, dressed like a cross between a clown and choirboy, and that perhaps sums up the pertinent theme in the show: what if you’re an idiot man child just trying to do something good? It may at times feel little confusing and may not all be successful, but there will still be big laughs.

A-K is on at the Forum Theatre until April 23rd
https://www.comedyfestival.com.au/2017/shows/sam-simmons-a-k