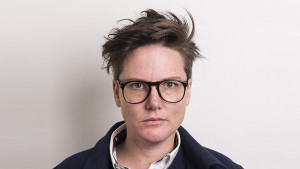 It’s genuinely difficult to write about this astonishing, fearless, gut-wrenching show. If you are a fan you cannot miss it, if not you probably should see it anyway.

While skilfully written and brilliantly performed by Hannah at her most eloquent and charismatic, Nannette remains raw and stark. There are no bells and whistles to this show, it is a beautifully written letter to her comedy fans to explain some big life decisions. It’s a reminiscence of her life, and a look at how she has cooked up some raw life experiences into more palatable comedy routine fodder. She revisits familiar routines and shows us the reality behind the comedy curtain.

Hannah doesn’t owe us anything and she makes that clear but she gives us one hell of a show anyway. Even her art history comedy fans are given the gift of an evisceration of society’s relationship with Van Gogh, his art and his mental illness. Something Melbournians can keep in mind when going to see the Van Gough exhibition that starts at NGV later this month. At the same time Hannah explores her own art and its connection with her mental issues and the love of family.

This feels like another MICF show that has been born out of the darkness of 2016. World upheavals over the past year have left us all feeling dismayed and have also led to a reassessment of Hannah’s life that she needs to share with us. It is often very funny, but Hannah is not afraid to take a break from the laughter and the relaxed, clumsy country dag that we know and talk brutally and directly to us about some serious, heartfelt, personal stuff. Hannah is mad as hell, but also more confident, about her craft and her self.

It’s so great to live in a city where we have a Comedy Festival that is a safe space for this kind of brave theatre. Take a loved one to this show so you can hug them afterwards and hang out for a while afterwards to talk and decompress.

Nannette is on at Melbourne Town Hall (Lower Town Hall) until April 23
https://www.comedyfestival.com.au/2017/shows/hannah-gadsby-nanette