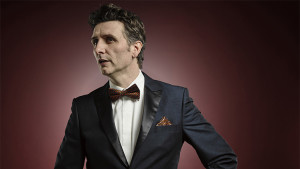 I’ve not seen or read I, Claudius, so this may have been the entire plot told in a clever way, but I doubt it. I do know that it is a historical fiction of Claudius Caesar who was wrongly considered by his family to be an idiot so there are clearly some parallels. The only direct reference to Roman times was a cute song about watching gladiators. It certainly pleased the crowd.

The show itself started a bit shakily, not unlike Frank’s clown persona. He seems to be struggling somewhat with his identity; how does he give the audience the persona they are expecting and still grow as a performer? The show gradually emerges and in amongst all the silly clowning absurdity, it actually felt very personal. Frank rarely gives much of his private life away in his comedy. In this he refers to his wife and child and also seeking therapy. He keeps it all light-hearted and doesn’t go down any dark holes, like many of his comedy peers this year, but there’s his anxiety. The voice in his brain is personified as a grumpy homeless man who does and says terrible things, but Frank is kind to him anyway.

I Woodley is a show about putting on a show, using his life for inspiration, trying it out on audiences with varying levels of success. Frank is an engaging storyteller and a genius mime, but the highlights for me were when he broke out of it to chat to audience members directly and particularly when he improvised funny material with them. It was like comedy magic. Not all comedians are comfortable talking to audience members, but Frank made it look like he genuinely enjoyed getting to know them and they enjoyed helping him with part of his show.

Frank needn’t be too nervous about ageing, as his comedy is ageless and his audience is made up of all ages. I, Woodley was not the most hilarious show that Frank has ever put on, more gentle laughs than heavy guffaws, but always goofy, charming and delightful. It was also a fascinating insight into the working mind of a master entertainer.

I, Woodley is on at The Fairfax Studio, Melbourne Arts Centre until April 16
https://www.comedyfestival.com.au/2017/shows/frank-woodley-i-woodley