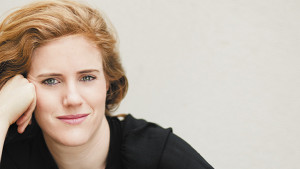 Before starting she gets the housekeeping out of the way with a bit of good advice to the room, it’s going to get hot and you might want to peel off some layers. I find layering is very important at comedy festivals as a lot of the rooms are hot and stuffy. Turning phones off is a good idea too. No that’s just mandatory. Especially in a densely written show like this which requires concentration.

Shaken is part of a trilogy about Sarah Kendall’s teen years in Newcastle, two hours north of Sydney and about the magic of storytelling, the truth and lying. Its called The Australia Trilogy and the other two are called A Day in October and Touchdown. Each one is a fairly neat story of its own and some of the characters reappear.

Once the story proper gets underway there are no diversions from her very tight script and the audience is completely captivated. There are some laughs throughout, mostly from her hilarious impression of her quirky mother with whom she was very close in a fairly friendless teen-hood. It is unsurprising to learn that Sarah as a lonely child learned to “tell stories” to make people interested in her. This is one of those ‘stories’ that gets completely out of hand and more laughs are to be had from Sarah digging herself deeper and deeper into trouble.

I don’t like spoilers, so I didn’t read the blurb for this show, but it would certainly have changed the experience for me. The blurb mentions that the Newcastle earthquake is a backdrop for the story, though in fact the earthquake appears only right at the end as quite a shocking surprise, as earthquakes do. The blurb also mentioned overpriced sausages and there were none of these in the show, so maybe something was missing. It did feel a bit like there was something not quite right with the performance which felt too scripted and a little remote from the audience in the room, then at the end you had no way of knowing what was true and what was not.

As the elderly woman in front of me said as we left “It wasn’t exactly a laugh a minute, but it was interesting”. Sarah Kendall is a great storyteller with a great story to tell and if you are in the mood to listen to a riveting (possibly) biographical story being told to you at the comedy festival then this show is for you.

Sarah Kendall: Shaken is on at The Melbourne Town Hall until April 23