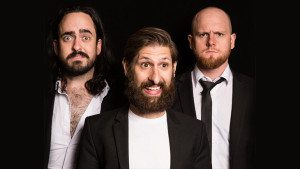 The first time I reviewed Aunty Donna (Mark Samual Bonanno, Broden Kelly and Zachary Ruane) they were yelling about fax machines in a tiny room at the Lithuanian Club. It’s surreal to see them where they are now – playing to a packed audience of fervent fans at Max Watts with lights flashing, smoke machine whirring and music pumping. Big Boys is a slick production that’s equal parts sketch show and a night out clubbing.

There’s a thin thread of narrative running through Big Boys – Ruane hasn’t been putting in enough effort and Bonanno wants him to step up. In between the continuing argument, we see brief sketches about things that are happening right now, rap battles and a car race. At the back of the stage, Tom Armstrong pulls it all together, DJing and providing sound effects throughout.

Beneath the flashy set-up and showmanship is a strong base of fantastic sketches. Aunty Donna are at their best when they venture into absurd territory, peppering in beautifully bizarre details at the back-end of broader bits about drums or getting money to go see a movie. The writing is strong and the performances are well-rehearsed. Everything in this show works beautifully, even when things look like they’re not going to plan.

The audience adds a whole other dimension to an Aunty Donna show. The energy in the room is at a steady high and the boys clearly feed off of it. One of the best moments of the night was audience generated, when they spontaneously erupted into a standing ovation after Armstrong delivered his one line in the show.

No-one else does sketch comedy quite the way Aunty Donna do, and their originality is paying off. Big Boys is a joyously silly experience and a fine example of a new generation of live comedy. If you like your comedy loud and high-energy, Big Boys is the show for you.

Big Boys is on at Max Watts until April 23
https://www.comedyfestival.com.au/2017/shows/aunty-donna-big-boys