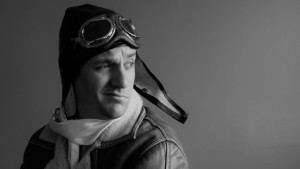 A plane takes off from the tarmac, filled with crew and passengers – each with a story to tell. This is the set-up for Ben Russell’s The Pilot, a hilarious character comedy that is the perfect vehicle to show off Russell’s talents.

The Pilot has a cast of many, all played by Russell. Onboard the plane, we meet a dejected co-pilot, an uppity stewardess, a Chicago ex-cop and more. Each character Russell slips into is distinct and well-rounded. The accents are at times unplaceable, but the voices are clear and it’s easy to follow the story as Russell switches from thread to thread. There are thoroughly enjoyable moments with every character. Russell doesn’t let the pace drop for a second, getting big laughs even when he fumbles or a bit of audience participation doesn’t quite go to plan.

The plot of The Pilot is a secondary concern. The most enjoyable parts involve Russell going off on an odd tangent, often involving a lengthy section of mime work. A moment in which Russell silently portrays the backstory of his stewardess is an absolute highlight. The show has a great script, but it’s loose enough for Russell to play with the audience and muck around with sound cues. It looks like Russell is have a great time on stage and that enthusiasm and sense of fun is infectious. The Pilot feels like more than a one-man show, such are the energy levels in the room.

The Pilot is a show that is jam-packed with nonsense. Russell provides some of the best character comedy in the festival and it’s extraordinary to watch. It’s ambitious, ridiculous and very, very funny.

Ben Russell – The Pilot is on at Melbourne Town Hall Lunch Room until April 23
https://www.comedyfestival.com.au/2017/shows/ben-russell-in-the-pilot