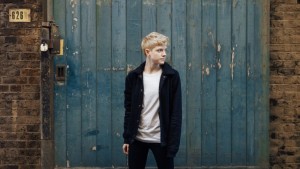 Mae Martin’s story is an interesting one, she grew up in a liberal household where she was encouraged with following the things she loved, which can lead to obsession and addiction, and in Dope Mae tells of the ways these things have played out in her life.

As a young child Bette Midler was her first obsession and her first crush, even if she wasn’t quite sure what all those feelings meant at the time, but she can see now that her love of comedy, her relationships, and dalliances with drugs are all related to the triggering of dopamine levels, which she refers to as the shrimp man in her head, and that’s the thing that controls her obsessive and addictive personality.

She makes friends with the audience with some chatty introductions, and relates her experiences in an open and light manner. Her friendly style in contrast to the serious nature of some of the subject matter, but it is also comforting, She reassures the audience that’s this isn’t going to get depressing.
Stories of her crush on Bette, and her over enthusiastic teen years spent hanging out in a comedy club are interspersed with tales about travel, her mother, and awkward dating. There’s musing on how addictions and obsession could be two sides of the same coin, which is an interesting note, but it’s not explored in any depth.

At times she is distracted by her asides and she seems a little scattered in delivery. Going off-piste does provide moments of extra laughs, but her hesitation in continuing on, or in not ending a segment confidently makes her delivery feel uncertain at times. Unfortunately when the end of the show draws near, she admits she had missed the main exposition that the final segments callback relies on. The material is delivered belatedly but jovially and the audience is on board with Mae, but it did highlight some of the insecurities in her delivery.

Mae Martin is a very likeable comedian with some great stories to tell, and despite the delivery being erratic Dope is very enjoyable with plenty of laughs throughout.