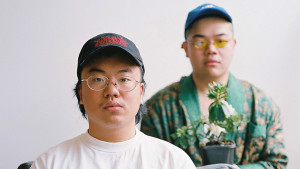 Aaron Chen has been coming up in the Australian comedy scene for a while now. He won Class Clowns back in 2012, and last year he picked up a Directors’ Choice award for his work with Feeble Minds. In The Inifinite Faces of Chenny Baby, Chen strikes out on his own and delivers. It’s a wonderfully weird hour of deadpan stand-up that left some audience members helpless with laughter.

The show starts strong with a bizarre karaoke video starring Chen and his co-star Jon Lo. From there, Chen launches into stand-up on all manner of topics, from Kanye West to white people food. Although the show is ostensibly a straight-up stand-up show, there are little touches that make it feel more alternative. Chen’s delivery is deliberately stiff, with a tendency to over-explain and stretch a joke until the tension in the room is at breaking point.

The Infinite Faces of Chenny Baby is billed as Chen’s solo debut at MICF, but it’s more of a two-hander. Sidekick Lo is to the side of the stage throughout, giving Chen someone to bounce off. Their relationship is wooden and a little antagonistic and a lot of fun to watch. Lo performs a few physical gags and they’re some of the highlights of the show.

Chen played up the fact that it was media night, pointing out the benefits of the show to any reviewers in the audience. We’re alerted to the fact that he has a cough and that he has put significant effort into his set design by introducing a pot plant, and both of these things should count for an extra half a star. If we awarded stars, I’d be inclined to add one. It was a nice pot plant.

The Infinite Faces of Chenny Baby is a brilliant not-so-solo debut from Chen. His offbeat brand of comedy might not be for everyone, but he’s a unique voice that’s sure to get stronger.

The Infinite Faces of Chenny Baby is on at the Victoria Hotel Vic’s Bar until April 23
https://www.comedyfestival.com.au/2017/shows/aaron-chen-the-infinite-faces-of-chenny-baby