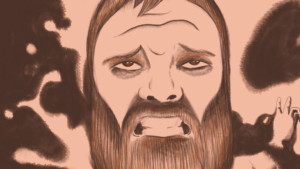 Greg Larsen may have top billing on the posters for A Grub In The Muck, but upon entry to the Zeus Room, you discover that A Grub In The Muck is a late night show and Larsen is not in charge. He has cast himself as the sidekick to creepy mannequin host Bruce Mumm, aka Mummy (voiced by Ben Russell), as well as playing the string of guests appearing that night.

There’s a level of desperation in all of the men Larsen plays, from a city council worker to a concerned dad. They’re men in tough situations that stretch their dignity, trying to make the best of it. As people, these characters are often quite unlikeable, but Larsen plays them with enough heart that you do feel for them while they are in the depths of humiliation. Another common thread that runs between the guests of A Grub In The Muck is that they are all utterly ridiculous, and it’s the combination of self-importance and triviality that makes it all so hilarious. One segment, in which Larsen gives a TED talk, had me crying with laughter.

Larsen isn’t afraid to get down amongst the filth for his comedy. While this show isn’t as confrontingly revolting as some of his previous work, it’s certainly an element that remains. Throughout A Grub In The Muck, Larsen struggles with his desire to make political comedy that does some good versus the big laughs he gets from being gross and debasing himself. It’s an interesting tension to discuss, and bringing it up makes the final moments of the show all the more effective. Russell’s voicework as Mummy is also to be commended. His brash, over-the-top confidence is the perfect foil to Larsen’s doormat co-host and works as a physical representation of his baser instincts.

A Grub In The Muck is a fabulous show that perfectly balances the crass and the clever. Larsen might play the sidekick here, but his talent truly shines through.

A Grub In The Muck is on at the Greek Centre, Zeus until April 23
https://www.comedyfestival.com.au/2017/shows/a-grub-in-the-muck