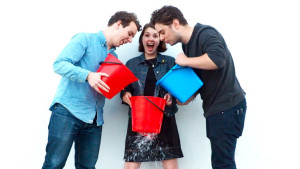 Leaky Bucket (Prue Blake, Darcy Fleming and Matthew McCartney) are a young sketch troupe performing their first MICF show together. This peppy trio of upstarts are eager to show off their sketch talents but as the performance progresses we soon see that all is not as it seems.

The sketches start off quite strong but soon come to a screeching halt as the cast work out their issues, usually with Matt being put back in his place. “You’re such a Matt!” is a phrase repeatedly shouted throughout this hour. This is an intriguing structure, breaking the fourth wall not only to deconstruct the performance but also introduce some comedic conflict. The meta elements regularly encroach on the actual sketch content, so much so that the “scenes” become secondary to the storyline involving our performers.

Your typical comedy trio character traits are set out right from the start, Prue the rather manevolent control freak, Darcy the pretty boy lap dog and Matt the dimwit relegated to background duties. They do all the usual comedic bickering bits (Matt is too dumb to be insulted by the cruel remarks, there’s a bit of sexual tension, we see a doomed power struggle and Matt quits the group) but this usually devolves into shouting, cruel taunts and not much else amusing or witty. Fans of the humour of cruelty will find plenty to like in this. Throughout the show each performer has a monologue recalling traumatic events from their youth, recounted with surreal details and overblown drama which fleshes out these characters beautifully.

The quality of the “sketches” are the usual mixed bag which have a few hilarious moments but often outstay their welcome. As you come to realise that they are not the actual focus of this show, you can happily forgive the sliding quality to an degree. However these peeks behind the curtain often suffer the same faults as the sketches.

The performers sell their stage personas with varying success: Blake plays her evil controller a little too subtly, Fleming brings a nice smarmy attitude to his character/s and McCartney has such an manic wide-eyed intensity that it is hard to take your eyes off him. They all work well together but they mostly play it all to the crowd rather than to each other. This seems counter intuitive but exaggerating performances both in and out of “sketches” maintains an apt artificial atmosphere and cements the fact that this is not a serious sketch show.

This wildly ambitious exploration of a sketch trio in crisis is rough around the edges but entertaining and certainly lives up to its title.

First Crack is on at The Last Jar until April 23
https://www.comedyfestival.com.au/2017/shows/first-crack