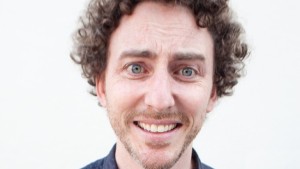 A 2000 strong crowd are waiting for comedy legend Russ Danger to take the stage. Holding the fort is warm up comedian Liam Ryan. He dances for our amusement during the absence of the headliner in this wonderful study of anxiety & humiliation that seamlessly merges this intriguing premise with an hour of Ryan’s solid hilarious stand up.

We get brilliant routines covering embarrassing situations in public while trying to act cool, being the assistant manager at a bar in London and the astonishing situations his parents and grandparents put their offspring through. These stories suit the theme perfectly as does some material about doing warm up for TV that slots in nicely with his patter before the “ravenous fans”.

Ryan is already a bundle of energy on stage with lots of excitement and movement so adding the nervous energy of a comic pushed into an impossible corner can only enhance the show. He has an exaggerated actorly air to his delivery which heightens the absurdity perfectly. The anxiety isn’t pushed so far as to detract from his stand up, instead he adds amusing lines as he verbalises his fears and comments on his surroundings in an almost stream of conscience ranting that is a delight to watch.

Some nice touches are added to flesh out the story of the missing headliner and make some jokes about the pitfalls of being a warm up act. An uncooperative tech guy, doomed negotiations with the promoter and the intense heat of the spotlight has us sympathising with our hero. This signals to us not to play the role of an angry mob, a scenario this story could have easily lead to, but a much subtler resolution that has us leaving the show with smiles on our faces.

This is a brilliant hour in the hands of a consummate comedian.

Well That’s Disappointing is on at Hairy Little Sista until April 23
https://www.comedyfestival.com.au/2017/shows/liam-ryan#