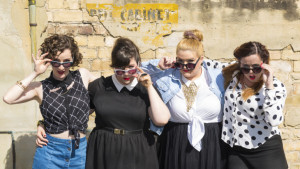 Take pop songs by male artists. Have them performed by four women cabaret singers. Listen carefully to the lyrics and you will find that some of them are more than a little bit dubious.

By being performed by women, the show highlights just how ridiculous and disturbing the lyrics of the chosen playlist are. The women of Lady Sings it Better are all fantastic cabaret performers and vocalists, and while most of the comedy comes from the subtle ways they react to the lyrics they sing, there’s also some exposition in between songs, and a little flirting with the audience to get extra giggles. The whole ensemble is clearly having a great time performing.

A boy-band medley featuring such lads as Backstreet Boys through to One Direction gets the younger audiences members very excited and bopping along. But it’s not just modern pop music that is full of homophobia and misogyny: there are plenty of musical choices from all eras that feature dating and seduction techniques that vary from a little worrying to downright creepy. The set list includes a variety of tunes from 60s rock n roll, 90s college rock, and classic love song dedications that all get the Lady Sings it Better feminist cabaret makeover.

It’s a show that keeps everyone thoroughly entertained, and leaves us all keen to listen more carefully and analyse the lyrics of the next pop song we hear.