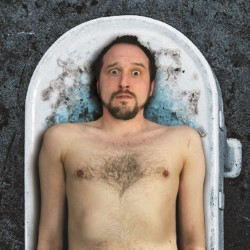 What a gloriously shambolic hour of deliberately bad comedy we had here. The premise is that Phil was frozen three years ago due to an incurable disease and now that a cure is available he has been unfrozen. First he is required to undergo a series of tests and challenges to determine whether it will work.

These tests involve selected audience members and are extremely humiliating (but only for Phil). It’s worth coming to see this show just to see whether Phil can survive to the end as he really does go overboard in trying to destroy himself (especially his knees). There was also one routine where he had to undergo exercises and chose a VERY fit gent from the audience to challenge him. I have never seen a man go that particular shade of purple (or a random audience member do quite so many one handed push-ups).

The audience were in stitches at a lot of the ridiculous stunts and I haven’t laughed out loud so much in ages. Don’t go expecting any highly crafted verbal gymnastics or elaborate props/puppets and you’ll get to see an excellent hour of very silly comedy with a little message of hope at the end.

Phil Ellis Has Been on Ice is on at Just the Tonic at The Mash House until August 27
https://tickets.edfringe.com/whats-on/phil-ellis-has-been-on-ice