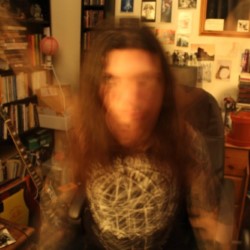 A mysterious sombre figure walks through the room, with incense smouldering, reciting an incantation to the Greek God Hermes. As he enters the light of the stage and puts down his accoutrements (as some confused punters quickly depart) he is revealed to be comedian Andrew O’Neill. So begins the Black Magick Fun Hour, the reworking of a show which was to be titled “Andrew O’Neill is Trapped Down a Well”. He has managed to meld that concept into the new one without too many seams showing and produce a humorous look at the cosmic forces around .

The main theme of the show is O’Neill’s dabbling with Black Magick. He explores how the Gods will give you what you ask for, but usually in ways you did not expect. In between stories of various rituals he has performed, living with his cat Ghost (and wife) and some wicked digs at the comedy industry, we get his usual ADHD fuelled flights of random nonsense.

Despite his scary appearance (to the Grannies at least!) O’Neill has a charmingly personable stage persona. Left of centre observations and clever wordplay are always a given at his shows. He prowls the stage when the story needs a bit of menace and puts on silly accents to flesh out the characters in his anecdotes. He is a joy to witness when in full flight.

In a move he considers selling out, a few metal tunes with parody lyrics are performed containing UK-centric references that flew over my head but got plenty of laughs from the surrounding audience.

If you like silly material with plenty of depth to it and a bit of cosmic philosophising, O’Neill is your man. Just don’t go in expecting stage magic (which happens to be what’s on in the other room) or you’ll be quite bewildered.

Black Magick Fun Hour is on at Liquid Room Annexe until August 27
https://tickets.edfringe.com/whats-on/andrew-o-neill-s-black-magick-fun-hour-free