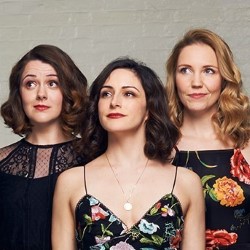 This is sketch comedy by Muriel – three very talented ladies (Janine Harouni, Meg Salter and Sally O’Leary) who perform a fast paced hour of sketches interlaced with video skits (to allow them time for costume changes). From their accents, I’m guessing they are from the US, Australia and Ireland respectively.

We start with a set of video chats with their parents, segueing into a sort of hip-hip improv troupe, learn from a fashion vlogger and an “upscaler”, meet a Brownie troupe preparing an ambitious musical for their camp, a hilarious (and saucy) art house movie sequence, an Aussie radio show with a guess that sound segment and the opportunity for the audience to chant a rude word. The best section was the wedding speeches at the end of the show.

There was hardly a pause in the flow of the show, the room was full of laughing people and we even got a free biscotti. Highly recommended, but be warned that this will be a sell out show, deservedly.

Bad Master is on at Underbelly, Cowgate until August 27
https://tickets.edfringe.com/whats-on/muriel-bad-master