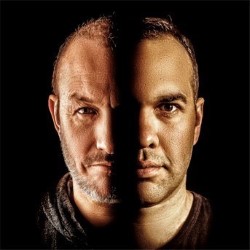 Who’d of thought that Brendon Burns would become an ambassador of sorts for race relations? He probably didn’t! He regularly points out that an unsympathetic character such as he is difficult to take seriously. Teaming up with Indigenous Australian comedian Craig Quartermaine he has produced Race Off – an exploration of how people tend to view “the other” differently to their own.

Rather than being assaulted with a diatribe about race, privilege and prejudice we get a personal story from two perspectives. Brendon tells of meeting Craig and his wife, and all the things that went through his mind… while Craig recounts having this Loose Unit comedian on his doorstep. They discover that even though they used to haunt the same locations, their experiences couldn’t be further apart. The tale continues through the development of this project and some of the events that have happened in its’ wake.

The performance style of each comedian is wildly different even though both call a spade a digging implement. Quartermaine is reserved and measured in his delivery – sitting back and considering his lines. Meanwhile we have Burns bouncing all over the place, shouting like an overstimulated child to get his point across. It was great fun witnessing them playfully goad each other and muck about and they clearly admire each other’s work (or at the very least tolerate it). We get to laugh at Burns comically portraying white privilege while Quartermaine shakes his head at the fool to his right and proceeds to point at this fact with a few words.

I can see how some white audiences back home could find some of this material uncomfortable but it’s far from judgemental and hilarious to boot. It’s aimed at white audiences who consider themselves tolerant (known as “White Knights”) and gives them some things to chew on. Both performers find the funny by coming at it from personal experience rather than academic theory. Even though UK punters are somewhat removed from Indigenous Australian issues, there is plenty to take away in the recognising and acknowledging of certain mindsets.

Part personal stories and part social experiment, this is not just a smart, worthy piece but also an entertaining and amusing hour in the company of this seemingly odd couple.

Race Off is on at Gilded Balloon Teviot until August 28