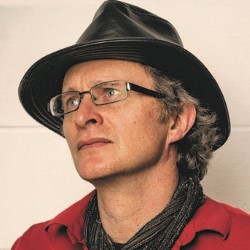 There was a time when Simon Munnery concentrated on high concept art pieces (such as Fylm Makker and the La Concepta Restaurant) but over the past couple of years he has gone back to straight stand up. The latest is Renegade Plumber and it is a brilliant offering by the master of surreal satire.

His stage persona comes across a little “rabbit in the headlights” but his words pack a hilarious punch. Audiences often begin a little wary of his strange world view but quickly warm to his quirky charm. He produces a number of wonderful props to surprise and delight. The inclusion of a lengthy letter from his daughter adds authenticity to a routine…but it all could be a ruse, couldn’t it?

Munnery treats us to some songs that are sung in a manner like Billy Bragg. The first is a protest song about Glasgow’s 1915 rent strike called “Mrs Barbour’s Army”, which is very educational after he comically deciphers the lyrics, and we all join in singing along to the chorus. He later sings some silly football chants about various supermarket chains which are hilarious in their focus and brevity.

The mixture of fascinating stories and surreal one liners in Renegade Plumber make a delightful hour in the presence of a master craftsman of comedy.

Renegade Plumber is on at The Stand 1 until August 28
https://tickets.edfringe.com/whats-on/simon-munnery-renegade-plumber