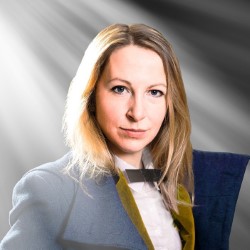 Despite the advertising DO NOT go into this show expecting material about JK Rowling’s universe. Definitely DO NOT bring along the kiddies as she had exactly one joke referencing Harry Potter and it is quite filthy. Instead what we got was self deprecating stand up from Jenny Collier that raised plenty of titters but not the guffaws she was expecting.

Covering topics such as growing up in small town Wales, bodily grooming and dating, Collier isn’t afraid to get graphic and is constantly apologetic for it. I’m sure hearing such confronting talk from such a sweet looking young woman has some humorous appeal and there are plenty of interesting ideas here, but a lot of it doesn’t have strong punchlines yet.

Collier has a pleasant stage presence and can certainly keep the audiences’ attention but there was something a little off with her delivery. On occasion she clearly expected to get bigger laughs with her jokes which threw her and resulted in lines trailing off with little impact. It was almost as if she was already defeated before the words left her mouth.

The material didn’t always land, particularly when her questions about whether the audience either participated in or even knew about what she is about to talk about were met with silence. She was forced to plow on with her prepared lines half heartedly rather than change tact. I’m not sure if it was due to a rather timid crowd or the early timeslot that created this strained dynamic on the evening I attended.

Still it’s extremely early in the Fringe so she’ll be fine tuning things as the season progresses. If you’re not overly sensitive and have a few drinks in you, this is an enjoyable an hour in Jenny’s company.

Fantastic Beasts and Where To Find Jen is on at Laughing Horse @ Espionage until August 27
https://tickets.edfringe.com/whats-on/jenny-collier-fantastic-beasts-and-where-to-find-jen