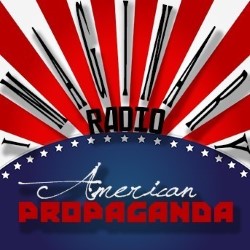 Imaginary Radio is a show in which American comedian Drennon Davis presents kooky radio broadcasts from his helmet receiver. With help from a rotating cast of co-stars (on this particular evening they were Nick Stargu and Jim Hickox) and a plethora of electronic gadgets, Davis brings these crazy stations to life – witless DeeJays banter, hilarious songs from each broadcasters’ playlist are played, adverts for bizarre products bend your brain and strange game shows beat you over the head.

Hickox warmed up the crowd with a bit of silly stand up using a unique approach – performing via camera from the rear of the room and adding witty text comments as he told the jokes. It was a gentle and fascinating way to start this multimedia show.

The humour runs the gamut from sharp social and political satire to pure stupid silliness. Daft impersonations of various singers and parodies of musical styles make up the bulk of the show but the crazy antics surrounding them prevents things from becoming a relentless musical comedy jukebox.

This is a very tech heavy show with colourful slides illustrating the logo of each station, sound effects punctuating the skits and all the cabling required for Davis to work his vocal magic. Davis uses loop pedals and beat-boxing to create the songs with Stargu adding some keyboards and harmonies to fill out the sound. The tunes themselves are great fun, hilarious and don’t outstay their welcome. Some are short and sweet while the longer ones are chock full of interesting and amusing ideas.

Davis and Stargu bounced off each other seamlessly – from surreal ad copy to exchanging lines in song, they were a brilliant double act. Hickox popped up again as various crazy characters to confuse and abuse the audience – a great way to add more lunacy to an already chaotic show.

If you’re looking for a immensely fun and hilarious off the wall show with lots of colour, movement and music Imaginary Radio is the perfect pick.