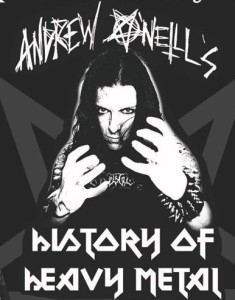 I’ve been hearing about this show for while and finally I made it to the UK to see A History Of Heavy Metal in person. Based on the book he has just published, O’Neill takes us on a personal and highly opinionated history of this musical form with plenty of guitar shredding and hilarious lines.

The version we saw was his stripped down version – squeezed from ninety minutes to sixty, minus the full band and slide show – but his enthusiasm guaranteed that we didn’t miss a thing. Amongst the sometimes shambolic self-teching, he kept us entertained with amusing banter and even let us squint at the key slides from his laptop.

Mostly playing along to backing tracks, we were taken through many memorable riffs, heard excerpts from songs to see how silly they can be and he even put his own amusing words to existing tunes to either poke fun at the band or give them a different silly context. O’Neill explained that normally he can hide amongst the mix of the full band, but his solo playing was impressive enough to carry the show.

He recalled a lot of the facts and figures from memory and occasionally reads a few passages from the book to illustrate the points. This gave things a bit of a classier literary feel rather than just being a straight comedic lecture.

This performance is heaven for Metal Heads and there were plenty of riotous digs at various bands. Knowing the references is key to getting all the jokes but even if you know little about the genre there’s still plenty to laugh at. My non-Metal companion was surprised at how many bands she recognised outside of the big names and had a brilliant time.

Go see it now and pick up the book ASAP (OR DIE!).