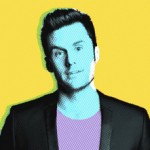 The incredibly down to earth Dave Thornton returns to the comedy festival fresh from killer runs at the Edinburgh Fringe Festival and all over the place. His head’s increasingly on the telly, on the radio, man, he must be doing something right.

Dave’s new show “The Some of All The Parts” is just another big fat slice of that “something”. The show is structured around an impending gig for a group of 12 year old private school kids, a terrifying thought, even for a seasoned professional public speaker like Dave. It’s the lead up to that faithful day that Dave draws his material, fleshing out hair-brained schemes to spark inspiration on how to inspire, like a well timed dream opportunity to interview a personal hero and an awkward sit-in on his mums sex ed class.

Dave squeezes every conceivable laugh from the story aspect of the show, while managing to tie in some general observational told with expert comic timing and larrikinism. Dave riffs off the audience with the best of them, the show flows effortlessly, there’s heart and soul behind the jokes, he’s charming, quick, witty…. I could go on and on! I guess what i’m trying to say is, Dave just doesn’t put a foot wrong. The ending is a classic underdog tale of conquering fear and kicking 12 year old school kid butt! Well, if they kids weren’t inspired, I was.

The simple fact is, stand-up just doesn’t get much better that this. Just straight, witty, accessible stand-up. A Dave Thornton gig is guaranteed gold. (Trust me, I saw him perform twice that night.)

Dave Thornton is on at Swiss House.