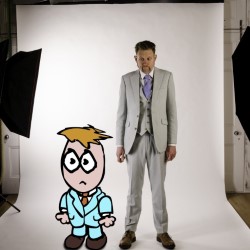 Big Howard and Little Howard have been performing primarily to children over the past decade and in this “adult” show they attempt to present a sophisticated piece about being a better person. Naturally Big Howard Read’s efforts are railroaded by Little Howard’s hilarious naivety and manager Roger T Pigeon’s vision of base humour.

In this multimedia spectacular, we get plenty of singing and dancing (you’ll be singing “Haberdashery” for days to come), clairvoyancy by unique means, attempts at political humour and heckling by angry cartoons. There is some nice comedic melancholy to contrast the pure silliness and a few hilarious digs at the comedy industry and Free Fringe.

Read plays the perfect straight man to all the other characters in this amusingly gentle power struggle. A perpetual six year old, Little Howard is the same adorable innocent he has always been and his hijinks and amusing quips are brilliant. A number of peripheral characters pop up as jokes that were rejected from other projects which are fun when used as a single joke but a bit laboured when repeated.

Compared to Read’s early work, the interactions with the animations are seamless – I guess the technology had to eventually catch up with Read’s immense vision of this cartoon / human hybrid. I doff my hat to him for this impressive feat.

Even though it stars beloved character Little Howard, DO NOT be tempted to bring the Rug Rats to this show. First, they won’t get into the 18+ Pub and secondly, there are frequent adult references, innuendo and occasional cursing. It’s about time we adults got to have some cheeky fun with this hilariously brilliant Human and Cartoon double act!